2017 | Performative presentation
Mycorrhizal networks are mutually beneficial symbioses between plant roots and certain types of fungi – forming a complex communication infrastructure for the exchange of both information and nutrients. Living Infrastructure proposes to merge our electricity and internet infrastructure underground with existing mycorrhizal networks to form a new symbiosis – to turn our inanimate cable infrastructure into a technically-augmented living organism that can grow, evolve and maintain itself.

In form of a video essay / performative presentation, Living Infrastructure is a semi-speculative vision that empathises the human role today in facilitating interspecies collaborations. By visualizing research and showing first steps and experiments, this project encourages us to work towards alternative technologies that are fit for an era beyond the human-centric mindset that helped shape the anthropocene. Instead of keeping ourselves busy with old modernist utopias like the ‘smart city’, can we envision different modalities of living together with our surrounding ecologies? 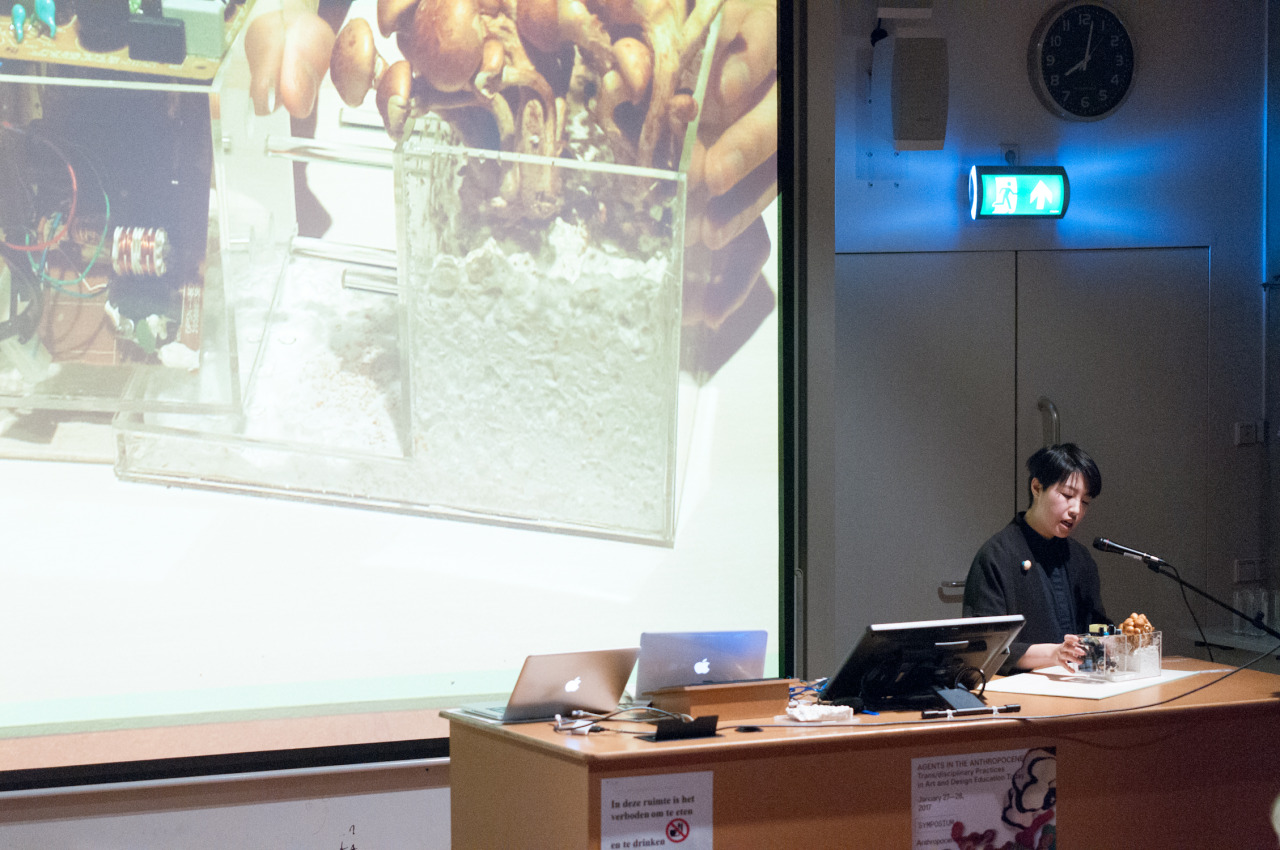 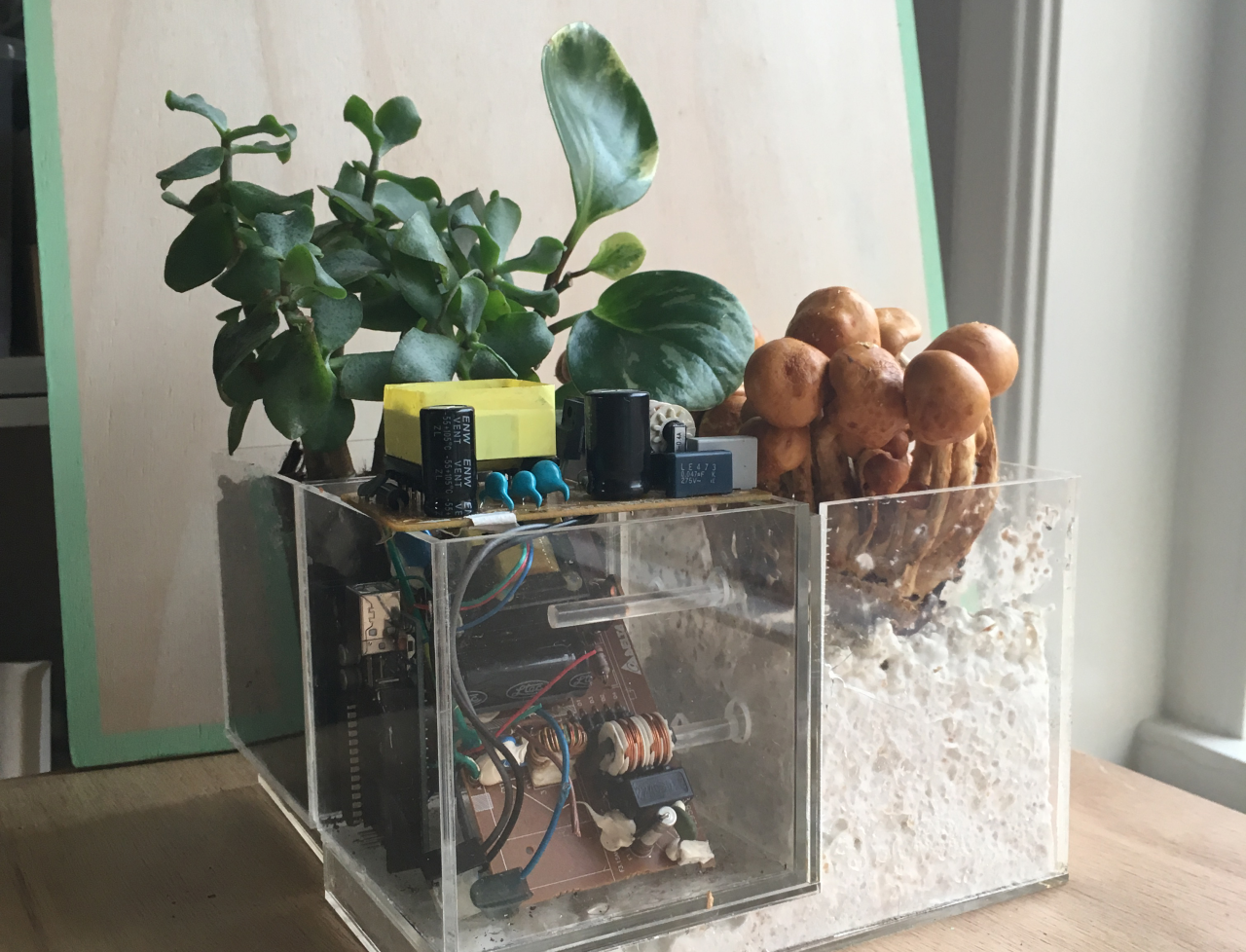 Imagine if we were to work closely together with a different species. Link our information network and with theirs, exchange goods and services to mutual benefit? This kind of system exists. Just not currently between us and another species, but between plants and mushrooms.

Some types of fungi form mycelium. They are little hair-like tubes that branch out in search of food, creating a network-like structure. You could compare them to roots. Some types of mycelium form a bond with plant roots, where they extend the plant’s reach for nutrients. And because plants are better at producing carbon from photosynthesis and mycelium is better at getting phosphorus and other minerals from the soil, they trade. This symbiotic association is referred to as mycorrhiza.

Mycorrhizae can connect entire forests creating a complex social network. Research has shown that trees are able to communicate with each other by sending i.e. warning signals through the fungal highway underground, encouraging other trees to brace themselves with the production of defense chemicals. Mycorrhizal networks also facilitate the exchange of nutrients between individual trees. Sometimes a nutrient-rich and healthy tree might donate some of its nutrients to a neighbouring nutrient-poorer tree through their mycorrhizal network connection. This is a beautifully dynamic infrastructure that exists already below the ground. It is alive, able to evolve and adapt to its environment.

How does our network infrastructure look like? For electricity and internet we have cables. We dig out some ground every time we place or replace them. But these cables still remain an isolated piece of human technology that have no relation to its surroundings. When we do this we tend to work against rather than with the landscape. We wrap the wires in layers and layers of isolation to shield them from what’s around, be it soil or water. If only our cables were able to relate to and tap into the abundant systems they are embedded in, we could have a biologically augmented type of network!

Therefore I propose that we merge our both systems and let these mycorrhizal networks teach us. To form a new partnership by joining our human cable network with mycelium networks. Just imagine if our infrastructure were actually a living organism that can grow, evolve and maintain itself !

A common notion is that technology and nature lie on two opposite sides. Can we not break this binary view on technology versus nature ? Especially with the current technologies at hand and the rise of synthetic biology we may see the combination of machines and engineered life to become ‘living machines’ – that will be able to integrate much better with the environment than any other of our inanimate technologies.

And we must be careful not to treat them like ‘machines’ that we simply use, but to see them as partners to work with. What we should aim for is a kind of interspecific collaboration. Because placing ourselves on equal level as other species, is where I see a new way forward, a mindset / an attitude that is fit for an era after and past the human-centric mindset that helped shape the anthropocene.

But the current vision of the future is not one about interspecific collaborations, but looks much more like this: the smart city. Where everything is tailored to man and nature only invited in when its elements are 100% under control – when it can’t be itself anymore.

Isn’t the point of ‘smart’ to create something that works well on its own? Wouldn’t it make sense to collaborate with a system that is alive and already autonomous? Instead of focusing on ‘smart’ we could be striving for living infrastructure!

How can this to be achieved? First, we need the willingness – as humans – to understand the fungus. For me it all started out with a few very small experiments, where I was trying to get to know the mycelium better, as a material but also as a living organism. I found that mycelium is conductive and can even generate small amounts of electricity. It can transmit simple data streams when connected to the arduino. Other experiments include me trying to grow mycelium under low current to see whether it minds. Or growing mycelium in heavy-metal contaminated soil, hoping it would take up some copper and zinc and increase in conductivity. My dialogue with the fungus was limited to me doing something to it and seeing how it would react.

But if we want to work together, we need to find better ways to communicate with fungi. We need to invent devices able to interpret the bioelectric and biochemical signals in the mycelium. By finding a common ground we will be able to listen in to what it is that the fungi wants and what we can do to serve its needs. Instead of forcing it do anything we’ll probably need to entice the mycelium to grow where we want it to grow. And care for its surroundings – to create favourable conditions – if we want it to grow well.

We need to be open for its input and make compromises. Adapt our tech, by lowering their voltage level. If our devices can become faster and smaller every year, they can also be made to run on lower voltage, like usb connections, arduinos and smartphones already do.

At the same time we’ll want to select and breed a mycelium for desirable network properties. By enhancing it with our technologies, we will help it to spread and become a very successful species. Mycelium can be bred to do many things, like it’s currently being done for material properties at Utrecht University. It’s possible to breed it for other properties as well.

I think by being considerate with each other and working towards a common goal of building this infrastructure, we can explore and approach this new interspecies relation step by step.

And we can do this! I alone can’t do this, as a bachelor design student I can but make a humble start. We need people who have the specific knowledge and the means to do this. We need scientists, philosophers, educators, critical voices and investors – to engage in and think more about such interspecific partnerships.

Instead of keeping ourselves busy with old modernist utopias like the smart city, can we move on to different modalities of living together with our surrounding ecologies? It will become evident how we are supported by living systems, and how we as part of this, also have our responsibilities and duties. Will large corporations treat the environment differently if their infrastructure depended on nature so directly?

To view natural systems on a more equal level requires us to give up some control to leave unexpected things to happen. To let the system evolve naturally with us. Not just for a sustainable, but also a resilient infrastructure.

I know this may not be implementable in exactly this way, because my vision is a still phrased by a human. At times the mycelium will not agree with us. And we’ll have to follow ITS path instead. And that’s fine.

Perhaps what I am proposing is not implementable on this scale. But before we dismiss this idea as too ambitious, I would first need to see enough effort invested in trying! I can promise that just the pursuit of this direction of thought will be a worthwhile journey to take on. Because learning how to work together with fungi is a first step to define a new more symbiotic relation between man – technology and nature.